Oscar received his first vaccination yesterday, the DTaP, or Diphtheria/Tetanus/Pertussis vaccine.  His mommy and daddy cried more than he did.  This was one of the hardest things I’ve done, which may sound a little melodramatic, but if you are a new parent you know there is an onslaught of information out there both for and against vaccines.

Flagstaff is a community that is as anti vaccine as it is pro home birth.  Just as I thought I would give birth at home, I also thought I would forgo or at least delay vaccinating my child.  How things change!  Before having my son vaccinated, I was terrified of vaccines and their terrible side effects (not just fever and swelling, but also seizures and death).  I became convinced that there was a link between vaccines and autism, as well as a link between vaccines and SIDS.  I am still not convinced that both of these are not true.  Also, the current vaccine schedule is VERY aggressive, consisting of 38 shots against 15 diseases before kindergarten, compared with 11 shots against 8 diseases 15 years ago.

The night before Oscar’s eight-week pediatrician appointment, during which time he was due for seven shots, I read this blog entry about vaccines.  I also read an article about vaccines in U.S. News and World Report that takes a balanced view of vaccines, advocating for the safety and effectiveness of certain vaccines while still questioning the current vaccine schedule and the link between autism and vaccines.  The magazine offers up an alternate vaccine schedule, which still seems too aggressive to me, so I decided to talk to our pediatrician about it.

Our pediatrician reassured us that vaccines are safe (as I knew he would).  However, he said two things that changed my mind about waiting to vaccinate Oscar.  First, he said that the pertussis vaccine can actually prevent SIDS because pertussis (commonly known as whooping cough) is a respiratory infection, and a lot of people have it and don’t know they have it.  It’s very serious for infants, and having a respiratory infection is actually a SIDS risk.  The other thing that convinced me was that he reassured me that it was fine to skip or delay some vaccines, such as Hep B or polio, until Oscar is closer to school age.  If he had taken a hard line on vaccines I would have balked, but his flexible approach and reassurance led us to decide that Oscar should have his DTaP vaccine.

I am moved by stories of parents in third world countries waiting in line for days to get their kids vaccinated, and I am also moved by stories of parents who feel very strongly that their children were injured by vaccines.  Most of all, I feel a great deal of compassion for parents who have to make this decision, which feels like “damned if you do, damned if you don’t…”  Seeing Oscar’s face when he got his shot broke my heart, and while I’m happy with my decision to vaccinate him, and will continue to do so on a modified schedule, my feelings might be different if he had had any kind of bad reaction.

As for Oscar, he is oblivious to this debate and the angst it causes his parents.  All he cares about right now is trying to fit both of his fists into his mouth at the same time. 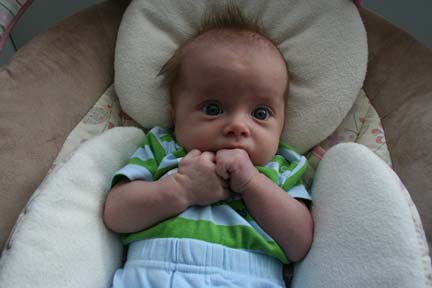